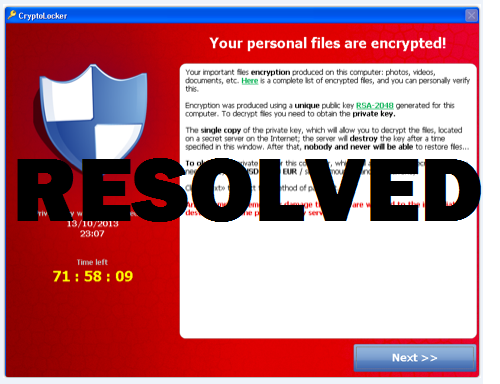 Got the CryptoLocker virus?  Congrats!  It’s one of the worst infections you can have.  Unless you have a couple years to spare and have a genius programmer mind, you won’t be able to decrypt this nasty little trojan encryption.

Could you have avoided it.  Yes!  And I’m sure you know what you did to get infected.  Remember that little zip file you opened?  Or that email?  Or that download?  Yup, guilty as charged.  Alright, I’m done judging and being dismissive.  Now, how can you remove the CryptoLocker virus?

Here are the ways you can remove the CryptoLocker virus:

1. Pay the ransom to unlock the CryptoLocker virus.

Okay, so I’m against this one, but not 100%.  Look, if you have a server or a dozen years of client folders and you want them back just how you had them before.  Pay the ransomware.  Yes, this further perpetuates these wrongdoers and the evil crime itself, but here’s the deal with these terrible people.  It’s a business for them.  They advertise how effective they are on YouTube with a 98% success rate.  They want you to know this.  In turn, you’ll be confident that the same people that infected you will save the day for you.  Pretty twisted, right?  I recommend asking for a sample file to recover first.  Give them a sample file and make sure to ask for the most important file you want.  Duh!  That way, you’ll know they are cable to unlock the rest of the files.

For many moral reasons, I agree with this one.  Who wants to pay a criminal?  Maybe you don’t want to pay through Bitcoin.  I’m totally against Bitcoin.  It’s an untraceable currency ruled by criminal.  Or maybe the fee is just too much.  I’ve seen the ransom being $10,000 – $20,000 in some medical centers or on sever networks.  Hopefully, you have a good backup.  And hopefully the backup is not infected as well!

Yup, we at New York Computer Help have taken years to unlock the almighty CryptoLocker.  Call it lots of pain, sweat, and tears to fight against such predators.  It really pisses us off knowing there is such evil out there preying on the innocent.  So, our efforts have been taken to really be the good guys fighting evil.  Like Batman or Superman fighting the Joker.

Unlocking the CryptoLocker virus to retrieve your files is what we do.  Keep in mind that results vary, meaning recoveries may bring back your full file structures, file and folder names whereas other recoveries are raw recoveries where your naming scheme is lost.  In the end, we are able to recover 90% or higher of your files successfully.  And the cost is pennies compared to what the CryptoLocker criminal is demanding.