Google Walk-out: Why was it done? The take-away for Google. 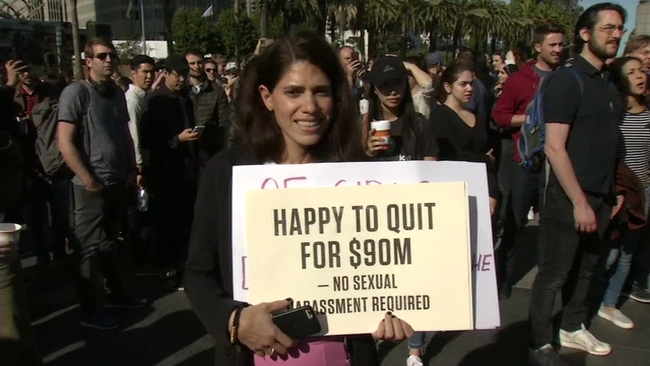 Google is still king.  But, the king took a right hook to the chin yesterday when all the Google employees staged a protest in an NYC park.  Other cities synchronized similar protests, including Chicago, Berlin, London, and Zurich.

So, what was the protest all about?  Why did it happen?  What was so big to plan multi-city Google protests?

The boiling point was when Andy Rubin, the Android mobile software creator, received a ridiculous $90 million exit package after receiving a credible harassment claim against him.  Instead of being transparent about it, Google tried to sweep it under the carpet by relieving this exec.  At the same time, he received the generous good-bye.  But, what happened to the victim?  Just got a good listen-to from the supervisor?

What happened to the 48 previous people who were fired for sexual harassment over the last two years?  We know they received exit packages?  But, at what price to the rest of Google?  The trend here of pretty much rewarding the harassers did not sit right with the Googlers.  And for good reason.  This is teaching the practice of if you’re behaving bad enough, we’ll pay you to leave.  Huh?  What about the victims here?  So, that was the argument and the “enough is enough” statement by the protesters.

The Google staff now what total transparency on each sexual harassment case.  Publish it instead of privately arbitrate it.  Well, Google and transparency don’t go well.  It’s very similar to Facebook.  We have your private info for advertisement purposes.  It’s not released, but we know you.  So, how can you tell a prying company to be open about its policies?  Can’t make an old dog learn new tricks, eh?  Of course, the Google staff went a step further to ask for salaries disclosures and compensation transparency.

All are rightful requests of company employees. I stand with the Google Walk-out employees.  Sexual harassment will not be tolerated.  There is not 50-50 here.  It is wrong.  If someone does it, the victim should be advocated for, not the accused.  Get it right Google.  And do it fast before your employees keep protesting.

On the flip side, I’m a big Google fan and own everything Google puts out so please big, strong computer service Google giant, don’t fault me for my freedom of speech here.  I’m just a little ol’ blogger looking to put my thoughts out there.